Revealed At Last — Where I Lost My [“I’m Alive with Clive” T-shirt’s] Virginity!

If you have read my previous two Blog posts, you will have noted that I recently lost my “I’m Alive with Clive” T-shirt’s virginity, and that I went up the Cableway to the top of Table Mountain again when I was in Cape Town on January 31.

Well, if, after reading my previous two Blog posts, you concluded that I must have chosen to lose my “I’m Alive with Clive” T-shirt’s virginity on Table Mountain, you are correct!

And today for the first time I am revealing pictures that were taken of me for the very first time in my “I’m Alive with Clive” T-shirt!

Here, again, is  the banner:

And so, Ladies and Gentlemen, here is the very first picture taken of me in my “I’m Alive with Clive” T-shirt: 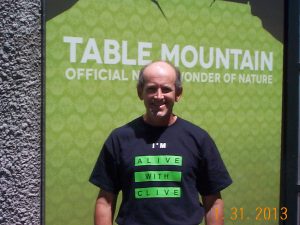 While I was having my picture taken under the banner, Ifraan Karim, a visitor from the United Kingdom with a sophisticated camera also took pictures of me not just there but in the cable car in motion as well.

Here’s one of the pictures Ifraan took of me facing the banner so you can see the words “Creating An Upward Spiral Of Brilliance And Joy In The World!” on the back of my “I’m Alive with Clive” T-shirt: 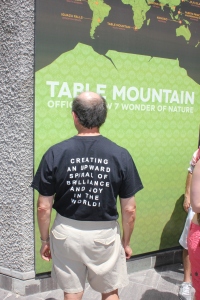 Me, facing the banner for Our African Wonder

Here’s one Ifraan took in the cable car going up the mountain: 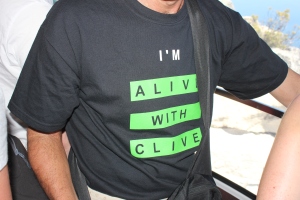 You can’t see me, but you can see my shirt

Picture of me in the cable car in motion

As previously mentioned, the panoramic vistas of Cape Town and the surrounding peninsula from the top of Table Mountain are truly spectacular, and I wanted to capture them in the background.

So, at various points on top of the mountain, with Ifraan no longer nearby, I asked sightseers who were there to take pictures of me with my camera.

Here’s a picture with Cape Town’s famous Victoria and Alfred Waterfront in the background:

V&A Waterfront in the background

In this picture of the scenery facing Northwest, on my immediate right you can see one of Cape Town’s Big 6 “must-visit” places, Robben Island, where Nelson Mandela was imprisoned, in the distance, and the small white “doughnut” you see further to the right is the new Cape Town Stadium, which was built for the FIFA World Cup Soccer Matches that were played in 2010, major sporting events and rock concerts for famous bands and singer/songwriters, including U2, The Eagles and Neil Diamond:

Robben Island and Cape Town Stadium in the distance

Here’s a picture of Cape Town Stadium from a closer range:

In this picture taken on the Western side of the top of Table Mountain, the back of Lion’s Head is to my immediate right and once again Robben Island can be seen further to the right in the distance: 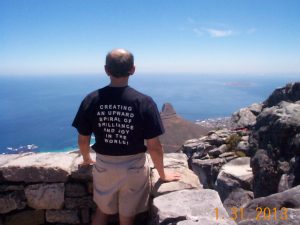 In this picture of the scenery facing West, I am standing “in the middle” of Clifton Beach, my most favorite beach in the world, on my left, and Camps Bay Beach on my right. 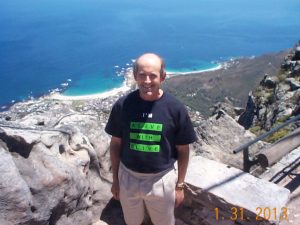 Camps Bay and Clifton in the background

With 20/20 hindsight, I can see that the quality of other pictures not shown in this Blog post would have been enhanced had they been taken by a professional photographer, and I realize what an art it is to take great pictures.

In the two pictures of me that are facing South, behind me you can see the way to Cape Point, the most southerly tip of Africa.

Here’s the first, of me facing the camera:

Cape Point in the distance, front

And here’s the second, with my back to the camera:

Cape Point in the distance, back

I’m pleased that I now have an album full of pictures, and fond memories, of my “Losing My [“I’m Alive with Clive” T-shirt’s] Virginity Photo Shoot” on Table Mountain — with me on top of the world at the bottom of the world — and I’ve enjoyed sharing the pictures in this Blog post with you!

Still to be revealed in a subsequent Blog post:  The first person in the world to be featured in a picture with me wearing my “I’m Alive with Clive” T-shirt!

1 Response to Revealed At Last — Where I Lost My [“I’m Alive with Clive” T-shirt’s] Virginity!