“Rock Song” by Dan Sheehan is the sixth song in The FIRST Alive with Clive Top 20.

Here is a picture of me with Dan that was taken in the TV studio before his interview on Alive with Clive: 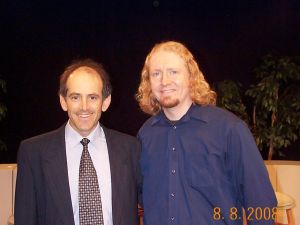 As mentioned in the Bio that used to be on his Web site, www.dansheehan.net:

For several years, singer/guitarist/songwriter/rocker Dan Sheehan was better known as “the guy from Banter,” his cult status rock band from Boston, Massachusetts, which later relocated to New York.  In 2008, the release of his dynamic first solo work, The Dan Sheehan Conspiracy, garnered him nationwide airplay on over 200 commercial, college, and internet radio stations, multiple CMJ chart placements and critical acclaim from the press.

A native of Long Island, New York, Dan formed his previous group, Banter, in the late 90s in Boston where he developed his performing skills playing such Boston-area hubs as The Middle East, TT the Bear’s, and The Linwood (now The Church), later branching out to other parts of the Northeast, particularly New York (CBGB’s, Brownie’s, Continental) and Providence (The Living Room).  Banter’s 2 albums, Side One and Urban Pastures showcased the act’s passionate blend of alternative and classic rock influences, received critical acclaim and got Dan’s music on radio and TV throughout Massachusetts (WBCN, WAAF, WXRV, WERS, WMLN, New England Cable News).

After returning to New York, Dan emerged from a lengthy confinement in his project studio to unleash his latest Conspiracy, on which he handled all vocals, guitars, bass, synth, and wind instruments, leaving the drumming to Morrissey veteran Spencer Cobrin and session man Roi Star.  The Dan Sheehan Conspiracy reveals what can happen when the driving force behind a band is released from group democracy and given carte blanche in terms of creative power.

As Dan explained during his interview on Alive with Clive when describing “Rock Song”:

People would see the title and see rock song meaning rock music, but it’s actually about rocks as in geology and geological metaphors.  In fact, it’s largely in response to the Simon and Garfunkel song, “I Am A Rock,” which is about people who for self-defense purposes close themselves off from things.  And my song is not about the closing off part but how sometimes it’s necessary to be a really sturdy person and be able to face a lot of things.  I wrote the song a long time ago, and musically it’s three-chord folk rock.  It’s not very complex but that was one of the first songs I wrote where people noticed there are some poetic ideas going on in these lyrics.

Here are a couple of excerpts of the lyrics from the song:

If I were not a rock, I’d be just a grain of sand

Brushed aside by footsteps as they redistribute land

If I were not a rock, I’d be unable to stand

And I stand for centuries

While oceans wash away

Immune to all decay

I love listening to the song, because it reminds me not to be like a feather in the wind (or a grain of sand) that is blown around by forces that could derail me, but to be an unwavering stand for what I believe in.  In other words, to be solid like a rock!

Here’s the video clip for you to enjoy of Dan Sheehan singing “Rock Song” on Alive with Clive:

You can find out more about Dan and hear a few of his and The Dan Sheehan Conspiracy’s other songs at www.myspace.com/dansheehan.

To see who else is in The Alive with Clive Top 20, click here.

www.alivewithclive.tv — raising at least a billion dollars for people affected by HIV/AIDS in South Africa!