I’m delighted to report that the first donations have been received on the road to fulfilling my quest to raise at least a billion dollars for people affected by HIV/AIDS in South Africa by December 1, 2012, World AIDS Day THIS YEAR.

To read about my MAJOR EPIPHANY and EXCITING NEW PLAN, click here.

After the first official day of the launch of The Alive with Clive Billion Dollar AIDS Plan for 2012, on August 4, 2012, $111 was received, and more donations are flowing in as word about this plan gets out!

I’m thrilled with this start and want to thank the initial contributors for their generous donations.

As a reminder, this campaign represents one way in which I am fulfilling my desire to create an upward spiral of brilliance and joy in the world, as reflected in the logo and slogan for Alive with Clive: 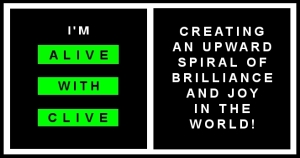 The Alive with Clive Logo and Slogan

In an article I saw on the Fox Sports Web site about Michael Phelps on the morning of August 5, 2012, after he captured his record 22nd Olympic Gold Medal, Jen Floyd Engel wrote:

“He dared to dream bigger. And he relentlessly chased his dream with hard work and dedication.”

This statement reminded me of one of my mentors, Mark Victor Hansen (co-author with another one of my mentors, Jack Canfield, of the Chicken Soup for the Soul series of books, and co-author with a third mentor of mine, Robert G. Allen, of The One Minute Millionaire, Cracking The Millionaire Code and Cash In A Flash), who dared me, as a protégé of The Enlightened Wealth Institute he founded with Robert Allen, to always dream and think bigger.

In fact, it was the following question, posed by Mark Victor Hansen at a seminar on Mega Philanthropy and Fulfillment hosted in Costa Mesa, California, in December of 2006, that led me to create this campaign to raise at least a billion dollars for people affected by HIV/AIDS by December 1, 2012, World AIDS Day THIS YEAR:

“If you were to raise at least a billion dollars for a charity, how would you do it?”

After I announced the launch of The Alive with Clive Billion Dollar AIDS Plan for 2012 and published the Web pages to accept donations, it occurred to me that it would be a good idea to share my insights, ideas and experiences involving this quest in Blog posts in the weeks ahead.

In the time since I embarked on this campaign, I’ve thought of several new ideas, and I know I’ll continue to think of many additional ideas in the days and weeks ahead, to make this quest intriguing, exciting, enlightening and memorable for all of us.

So in this Blog post, I am announcing that you can look forward to frequent and captivating updates about this endeavor here on my Blog between now and December 1, 2012, World AIDS Day THIS YEAR!

To read about my MAJOR EPIPHANY and EXCITING NEW PLAN, click here.

And, if you make your donation now, there is still time for you to have the honor of being ONE OF THE FIRST 100 PEOPLE to make a donation.

I am the Host and Producer of Alive with Clive -- Where Today's Top Singer-Songwriters Thrive! One purpose of the show is to inspire you to pursue your passions and fulfill your dreams -- in fulfillment of my promise for the world, which is to create an upward spiral of brilliance and joy in the world! For more information about Alive with Clive and The Alive with Clive Top 20, go to http://www.alivewithclive.tv. To see video clips of singer-songwriters who have performed on Alive with Clive, go to http://www.youtube.com/high5clive
View all posts by Clive Swersky →
This entry was posted in Alive with Clive Billion Dollar AIDS Plan 2012 and tagged 2012, 22nd Gold Medal, AIDS, Alive with Clive, billion dollar AIDS plan, book series, brilliance, Cash in a Flash, Chicken Soup for the Soul, co-author, Costa Mesa, Cracking The Millionaire Code, December 1, dedication, donations, dream, dream bigger, epiphany, exciting new plan, Fox Sports, fulfillment, Gold Medal, gold medals, hard work, HIV, HIV/AIDS, Jack Canfield, Jen Floyd Engel, joy, logo, Mark Victor Hansen, Mega Philanthropy, Michael Phelps, Olympics, only $1 or more, record, Robert Allen, Robert G. Allen, slogan, South Africa, The Alive with Clive Billion Dollar Plan for 2012, The FIRST Alive with Clive Top 20, The One Minute Millionaire, updates, upward spiral, World AIDS Day. Bookmark the permalink.