If you have been following my posts on Facebook lately, you will have noticed that I have been paying close attention to the campaign super-talented singer/songwriter, Natasha Alexandra, whose stage name is NLX, has created through RocketHub to raise the funds for her next album.

Natasha was a guest on Alive with Clive on January 21, 2011, and you can see a Blog post I published about her when you click here.

I love listening to her previous album, Bitch Get Fit, and am looking forward with eager anticipation to her new album which she has been recording over the past couple of weeks.

Bitch Get Fit by NLX 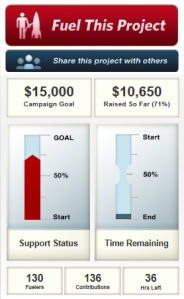 Yesterday I provided fuel for her project at the $100 level and so I am going to be receiving these benefits:

Because I chose this level, I am going to receive “12 custom one of a kind NLX 1 inch buttons” I can design.

To support Natasha in her campaign to reach her goal, I’ve decided to create 12 Alive with Clive custom one of a kind NLX 1 inch buttons to give away as prizes to the 12 drawn from the group of people who provide at least $20 of fuel to enable NLX to reach her goal between now and the beginning of Monday, July 30, 2012.

If there is a winner for every one of the 12 buttons, everyone who wins a button will also be entered in a drawing to win a set of four Alive with Clive Mugs – worth $100!

The Set of 4 “I’m Alive with Clive” Mugs

These attractive mugs are available for sale in The Alive with Clive Gift Store, which you can see when you click here.

Remember that you also will get your prizes from NLX for the level at which you provide fuel too.

When all is said and done, there will be no more than 12 of these buttons in the world, and if you win one, it will become a valuable item you will treasure and be able to pass down to your family for generations to come.

So, let’s have some fun and see Natasha reach her goal before Monday.

To provide at least $20 of fuel for NLX now, click here.

After you have provided your fuel, send an email to clive at alivewithclive.tv (use the @ sign instead of the word at with no spaces) with the words “Rocket Fuel for NLX” on the subject line to let me know you provided fuel for NLX because you read this Blog post.

After I verify your entry with Natasha, you will be entered in the contest to win one of the twelve buttons and a set of four Alive with Clive mugs too.

Since the purpose of this Blog post is to cause the current gap of $4,350 to be closed, only fuel contributions provided between now and the beginning of Monday, July 30, 2012, will count for the purposes of this contest.  If you have already provided fuel, please consider adding at least another $20 so you can be entered in the contest.

I look forward to receiving an email as a result of this Blog post from you.