Daniels and Edmond Together — A Priceless American/Australian Treasure!

If you want to experience an especially enjoyable night of great music and fun, you must, at the very next available opportunity, go and see Robert Daniels and Kylie Edmond perform together, or book them to perform at your next event or at your bar, café or restaurant.

On their own, they are each unique, but together they are a priceless American/Australian treasure!

I had the pleasure of being in the audience at their most recent gig on March 23, 2012, during a Friday night at The Starving Artist Café and Gallery on City Island in the Bronx, and had a fabulous time!

It has become a tradition of mine to capture a picture of Robert and Kylie without and with me after each gig of theirs I attend, and here’s the picture of us that was taken on March 23 after their performance:

I first became acquainted with Kylie and Robert about four years ago.

When I interviewed Robert on Alive with Clive, he attempted to convince me that he was writing songs for others to sing, not to sing himself, but I’ve been telling him repeatedly that no one can sing the songs he writes, and for that matter the cover songs he sings, better than he can.

Thankfully, my exhortations did not fall on deaf ears, since Robert went on to record a compilation of his songs on to a CD, appropriately titled American Original.

During his live performances, in a deep resonating voice rich in texture and reminiscent of Johnny Cash and Frank Sinatra, he intermingles several of the most captivating country songs from the past few decades, including “Folsom Prison Blues” and “Ring of Fire” by Johnny Cash, “Red Solo Cup” by Toby Keith, “People Are Crazy” by Billy Currington, and “Troubadour” by George Strait, with a few phenomenal originals of his own.  “You Don’t Have To Be In Mexico,” one of the songs he performed on Alive with Clive, is a song of his that became one of my instant favorites.  It’s the perfect song to hear immediately after a glorious vacation on a beach “where you had a week of magic ocean air,” when you’re back at work “and you wish you weren’t there!”  You will also hear him perform “Highs and Lows,” a song about the vicissitudes of life, “Never Doing That Again,” a song about his ambivalent resolve to refrain from imbibing alcoholic beverages, as well as “Still A Thrill,” an ode to his delightful and loving wife, Connie, and I also especially love the catchy and enchanting “Connie D’s All Night Tiki Bar,” among other songs he sings in the Trop-Rock genre.

Here is a clip of Robert performing “You Don’t Have To Be In Mexico” from The Alive with Clive TV Channel on YouTube:

Kylie has also built up a strong repertoire of original songs including “Leave Me,” a song in which she offers several innovative ways to end a relationship (for example, by changing one’s status on Facebook to single and free), “I’ll Remember You,” about wanting to fall out of love with someone who treated you wrong and deciding not to fall in love with any one else again, “You’ll Be There,” a song she wrote after she thought she’d lost her iPhone at JFK after boarding a plane to Perth, Australia, where she was born and raised, without it, “Mine For The Day,” a song about a woman whose husband is committing acts of infidelity, “The Good Fight” dedicated to the late Amy Winehouse, about fighting the good fight for those you love, and “Oh No No,” a song about a woman stuck in an abusive relationship, which is Song # 5 in The FIRST Alive with Clive Top 20.  To read the Blog post I wrote about Kylie and “Oh No No,” click here.

Here is a clip from The Alive with Clive TV Channel on YouTube of Kylie, accompanied by William Rottman, performing “Oh No No”:

Kylie also performs a most intriguing song called “Boys That Like Boys,” which she wrote in response to a request from her husband, Sean-Patrick Hillman, a principal at renowned Corbin-Hillman Communications, a marketing and communications agency, where Kylie also works, to dedicate a song to him.  “Boys That Like Boys” is about men she dated (who turned out to be gay) before she met and married Sean-Patrick.  If you’re in the audience with Sean-Patrick when Kylie introduces and plays this song, you are destined to feel a compelling urge to empathize with Sean-Patrick, who good naturedly takes the ribbing in his stride!

During her performances, Kylie demonstrates her range and versatility too, by singing such cover songs as “Poker Face” by Lady Gaga, “Tik Tok” by Ke$ha, “The One That Got Away” by Katy Perry, and “Who Do You Think You Are” by the Spice Girls.

Sean Patrick and Kylie, whose pooch, Snickers Edmond Hillman, has her own friend page on Facebook, have such a fond love for dogs and cats that they recently formed a charity called Rock & Rawhide to obtain such items as toys, blankets, towels, pillow cases, bath rugs, tough chew items, Kongs, Nylabones, rope toys, rawhides, cat toys, scratching posts, bowls, leashes, kibble, treats, and canned food for dogs and cats in animal shelters that are about to be put down.  The purpose of the items is to keep the animals occupied and content so that noise and stress they experience are eliminated in the shelters, and the charity has been gaining a strong following in the few months it has been in existence.

Here’s the logo for Rock & Rawhide:

The Logo for Rock & Rawhide, the charity for dogs and cats established by Sean-Patrick Hillman and his wife, singer/songwriter, Kylie Edmond

By now, since September 2011, Rock and Rawhide, with a Board of Directors that includes Z100 morning show radio personality, Elvis Duran, has collected more than 3,750 items with a weight of 1,980 pounds and a dollar value of $34,600.

Here’s a recent picture of Sean-Patrick and Kylie taken at Liberty Humane Society in Jersey City, New Jersey, with the 1,327 items weighing 965 pounds with a dollar value of $14,217 collected on March 25, 2012:

To make a donation of money or any of the above-mentioned items for dogs or cats, click here.

Here is a picture of Robert and Kylie singing one of the duets they performed at The Starving Artist Café and Gallery on March 23, 2012: 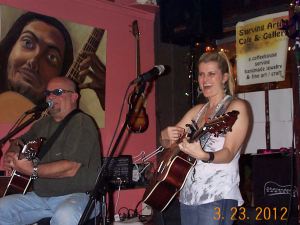 While their music is scintillating, what gives an evening with the two of them an added lift is the rapport and repartee that arises not just between them, but between them and members of the audience too.  The other night, for example, after I noticed that they were giving each other too many compliments, I hurriedly had to interrupt by saying:  “There’s something wrong with this picture.  You guys are being too kind to each other.”

Special thanks for the wonderful evening of entertainment must also go to Elliott Glick, an accomplished singer/songwriter in his own right, who is the owner of The Starving Artist Café and Gallery and also performed a few songs of his own.  Elliott recently appeared on Alive with Clive on his 62nd birthday to celebrate and perform three songs from his brand new CD, Once Upon A Time, which has twelve love songs, and is a strong nurturer and supporter of local singer/songwriters, many of whom have also been on Alive with Clive.

Here is a picture taken on March 23 of Robert, Elliott and Kylie: 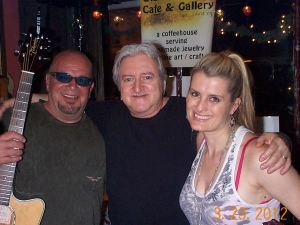 All in all, friends, as mentioned at the beginning of this Blog post, if you want to experience the pleasure of an extraordinary evening of fabulous music and fun, spend a couple of hours with Robert Daniels and Kylie Edmond together.  On their own, each is unique, but together they are a priceless American/Australian treasure!

I am the Host and Producer of Alive with Clive -- Where Today's Top Singer-Songwriters Thrive! One purpose of the show is to inspire you to pursue your passions and fulfill your dreams -- in fulfillment of my promise for the world, which is to create an upward spiral of brilliance and joy in the world! For more information about Alive with Clive and The Alive with Clive Top 20, go to http://www.alivewithclive.tv. To see video clips of singer-songwriters who have performed on Alive with Clive, go to http://www.youtube.com/high5clive
View all posts by Clive Swersky →
This entry was posted in Alive with Clive and tagged Alive with Clive, American, American Original, Australia, Australian, Billy Currington, Blues Man, Boys That Like Boys, Brad Paisley, Bronx, Can't Get High Enough, Carrie Underwood, cats, City Island, Clive Swersky, Collide, Connie D, Connie D's All Night Tiki Bar, Connie Daniels, Corbin-Hillman Communications, dogs, Dolly Parton, Elliott Glick, Elvis Duran, Facebook, Folsom Prison Blues, Frank Sinatra, George Jones, George Strait, Girls Rock The Night, Hank Williams Jr., Highs and Lows, I'll Remember You, iPhone, Jersey City, JFK, Johnny Cash, Katy Perry, Ke$ha, Kesha, Kid Rock, Kongs, Kylie Edmond, Lady Gaga, Leave Me, Libery Humane Society, Mine For The Day, Never Doing That Again, New Jersey, Nylabones, Oh No No, Once Upon A Time, People Are Crazy, Perth, picture, Poker Face, Red Solo Cup, Remind Me, Ring of Fire, Robert Daniels, Rock & Rawhide, Rock and Rawhide, Sean-Patrick Hillman, Sheryl Crow, Snickers, Snickers Edmond Hillman, Song # 5, Starving Artist, Starving Artist Cafe, Starving Artist Cafe and Gallery, Still A Thrill, The Alive with Clive TV Channel on YouTube, The FIRST Alive with Clive Top 20, The Good Fight, The One That Got Away, The Spice Girls, Tik Tok, Toby Keith, treasure, Trop Rock, Trop-Rock genre, Troubadour, Who Do You Think You Are, You Don't Have To Be In Mexico, You'll Be There, Z100, Z100 Morning Show. Bookmark the permalink.

2 Responses to Daniels and Edmond Together — A Priceless American/Australian Treasure!