“Cradle the Moon” by Cassandra Kubinski is the 11th song in The FIRST Alive with Clive Top 20.

Here is a picture of me with Cassandra that was taken in the TV studio before her interview on Alive with Clive on June 15, 2007: 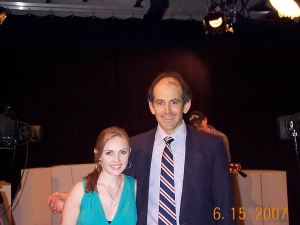 As mentioned in her previous and current Bio on her My Space page, www.myspace.com/cassandrakubinski:

Cassandra began songwriting with an eye towards making it her profession while attending Florida State University for theatre (she was a professional actress from age 13, racking up credits from the 20th anniversary production of “Annie” to the film “Finding Forrester” and the TV show “Spin City”).  Over the last decade, her musical and theatrical world travels have taken her from roots in Enfield, CT, to NYC, to Nashville, to Germany, and beyond.

Cassandra’s brand of dramatic, sensual, personal, classy, and sassy continues to earn her a wide demographic of fans, all of whom are willing to live their lives through the whole range of emotions, from poignant “what might have been” heartbreak to expansive gratefulness to fiery lust.

Cassandra is currently celebrating the release of her third album, LIVE at Camp Nashville, her first live album release and most personal album to date.  Recorded in Nashville, TN, in one continuous evening, the album features a first act of intensely personal songs, reminiscent of Joni and Jackson, or, more contemporarily, John Mayer and Sarah McLachlan.  It includes such original Cassandra fan favorites as “Sometime After Midnight,” “If,” “Everybody Waits,” “Chemical Imbalance” and “Freedom,” as well as a uniquely bittersweet cover of Journey’s “Separate Ways” and a cover of Matt Nathanson’s “Come On, Get Higher.”  The second act is comprised of songs from Cassandra’s previous two albums, songs written with her production team, TRIFECTA, and songs she pitches to pop and country artists.

Her two studio records, 2007’s Hold the Sun, and 2005’s hiding underneath garnered awards from Billboard, The Songwriters Hall of Fame, and the Positive Pop Song Contest and are available in hardcopy and digital release from CDBaby.com and all digital retailers, including iTunes.

As an artist, Cassandra performs regularly across the US and internationally. She has opened for Anna Nalick, The Nelson Brothers, Dickie Betts, Ingram Hill, and the October Project, and recently toured the nation as a Borders Books and Music “Artist to Watch,” promoting her album Hold The Sun.  Between stints re-making the classic “Le Freak” as a dance track with Nile Rogers producers, opening a music venue in Nashville, TN, and singing soul and classic rock in various wedding bands, in her own words: “I had an opportunity to do almost every kind of music I wanted to. I tried out a lot, experimented, saw what worked, and got that strange ironic blessing of figuring out what definitely does NOT work. My own music is so much more who I am as an artist now – reflecting all the music I loved that I was brought up on – Billy Joel, Carole King, Stephen Sondheim, Disney musicals – all really lush, smart, dramatic, theatrical stuff with such an emphasis on storytelling and the range of emotions in the music, whether it was the lyrics, the orchestrations, or just how intensely real and universal the themes were.”

As an actress, Cassandra played Sam in and contributed songs to Clear Blue Tuesday, a rock movie musical about how the lives of 11 New Yorkers were affected by 9/11.  It premiered in NYC on September 10, 2009.

Currently, Cassandra’s work encompasses her own artist career as well as vocal work for demo, jingle, and voice-over clients worldwide both on location and from her own SunChild Studios.  She is also writing songs with her production team, TRIFECTA, whose recent successes include placements on the Oxygen Network, TLC, and MTV, as well as signing a single song deal for “I’m Amazing” with Laurus One Publishing/S1 Songs America NYC. TRIFECTA writes songs for pop artists like Rihanna, Miley Cyrus, Pussycat Dolls, Britney Spears, and Faith Hill.

Cassandra also contributes songs and/or performances for charitable causes from LifeBEAT (The Music Industry Fights AIDS) to The American Cancer Society to Invisible Children, and teaches on creativity and music issues individually and in the public/private educational sector.

Most recently, Cassandra has been collaborating with Edd Kalehoff, principal of Kalehoff Productions, a full service music production company focused around Edd’s original music composing and music production techniques, and has released a wonderful array of outstanding new songs, including “Windblown Girl,” “First Kiss,” “Just Being Myself” and “Avalanche.”

This is what legendary singer/songwriter Billy Joel has to say about Cassandra:

“Cassandra Kubinski is a rarity. She’s a talented singer/songwriter working in a tradition very similar to the legendary solo artists of the early to mid 1970’s. Rather than surrounding her music with uber-production techniques and sonic gimmickry, she prefers to present her material unadorned and openly, allowing the listener to enjoy the ‘bones’ of the pieces with immediacy – as they were written.  When a lesser musician tries to do this, they often only verify that genre as an anachronism.  But when Cassandra showcases her songs as in these live performances [LIVE at Camp Nashville], she proves that the art form is not only alive and well, but that it is still capable of being transcendent.”

I personally believe that Cassandra is one of the most brilliant, talented and amazing songwriters in the world today!

Cassandra has previously been featured on my Blog in the post, “The ‘PATH’ To Creativity,” and the post, “Let’s Show Our Support For Cassandra!,” as well as in Press Releases I have written about her, which you can see when you click here and here.

“Cradle The Moon” is a song about being in an uplifting relationship, such that when life is beating you up and wearing you down, you come home to the one you love who believes in you and inspires you, and you once again become invigorated, energized and empowered to tackle the challenges you face in life with renewed strength and vigor.

Here are lyrics from the song:

And I get so defeated, just tryin’ to hold on

When I can’t hold my head up, my spirit is gone

Then I come home to you, when I’m safe in your arms

I can hold the sun, and cradle the moon

Oh, how you comfort me!

Do you know what that means to me?

When all of my dreams seem stuck behind bars

You give me the stars!

Here’s the video clip for you to enjoy of Cassandra performing Cradle The Moon, accompanied on guitar by James Adamo, on Alive with Clive:

Video clips of Cassandra singing “It’s Gonna Be Love,” “That’s Where You’ll Find Me,” “Sometime After Midnight,” “She’s Worth It” with Firan “4RON” Chisolm, and “Echoes,” are also available for you to see on The Alive with Clive TV Channel on YouTube, which you’ll find when click here.

To see who else is in The Alive with Clive Top 20, click here.

www.alivewithclive.tv — raising at least a billion dollars for people affected by HIV/AIDS in South Africa!

1 Response to Song # 11: “Cradle the Moon” by Cassandra Kubinski